The Seventh Annual Russian Documentary Film Festival in New York is proud to present a varied program of new documentaries – winners of Russian and international film festivals in 2013 and 2014. The films were made by Russian, American, and the Russian-speaking Diaspora’s directors.

Twenty documentaries will have their American premieres over the three days of the Festival. The Festival films are delving into Russia’s history and Russian contemporary society, showing orphanages, famous artists, writers, etc.

The hosts of the Seventh Festival will be announced.

The festival is organized by The New Review, Inc., the oldest intellectual literary journal of the Russian-speaking Diaspora based in New York since 1942. We present the following special programs:

Special program dedicated to the 50th anniversary of the death of Vasily Grossman, the author of “Life and Fate”. Q&A with the director of the documentary “I Knew That I Was Dead”;

Special program «Remembering the Holocaust». There will be two screenings: “The Holocaust – is It a Wallpaper Paste?” (Russia) and «…with God Against Man» (USA). Q&A with the American film-team;

Special program «In the Beginning Was the Word» in honor of Russian literature. This program consists of two documentaries: «Russia’s Open Book» (USA) and “Writer ‘Pi’. The Attempt of Identification” (Russia). Q&A with the American film-team.

Special screening devoted to the 100th anniversary of World War I – documentary “The General Headquarters”;

Special program dedicated to the 70th anniversary of the Leningrad Blockade – The Siege of Leningrad – and to the release of the Russian fascist-occupied territories during WWII.

Special screenings of documentaries made by young Russian and American film-directors – «The Open World».

Special presentation of the Russian National Guild of Documentary Films and Television. Q&A with the Guild’s representatives.

The festival has competition and non-competition programs. There are three festival awards – Grand Prix, Special Jury Prize, and Special Prize “Faces of Russia”. Among the jury members are world-known artist Vitaly Komar, film-director Lucy Kostelanetz, and others.

All documentaries will be screened with English subtitles.

The 7th Russian Documentary Film Festival is organized by The New Review, Inc. (USA) in partnership with the Diana Bagrationi Foundation and VK-Studios (USA), and creative collaboration with Causa Artium, Inc. (USA) and the Russian National Guild of Documentary Films and Television (Russia).

IN THE COMPETITION PROGRAM:

The Subscriber is Temporary Unavailable
The Blockade. When Healed Only Compassion
Vasily Grossman. “I Knew That I Was Dead.’
Everything That We Are Doing
“Straightening Sigh”
The General Headquarters
Non-Stop City
Katya
Blood
Mamas, Kids and the Law
Medem
Writer “Pi”. The Attempt of Identification
“Goodbye America!” or the Last Movie by Alexander Dovzhenko
Russian Dream
“The Holocaust – Is It a Wallpaper Paste?”
“I Was Your Son, Russia!”
Russia’s Open Book: Writing in the Age of Putin
From Russia with Math
“…with God against Man” 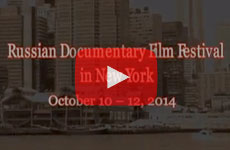 in creative collaboration with
Causa Artium