PROGRAM OF THE 12TH RUSDOCFILMFEST-3W

October 15
THE BOTTOM (Russia)
OSCAR (Russia)
ROMAS, THOMAS AND JOSEPH (Lithuania)
YOU BE THE JUDGE (USA)

The 12th RUSDOCFILMFEST-3W has concluded. The documentaries screened at the festival were made by filmmakers and sponsored by production companies from the U.S., Bulgaria, Belarus, the United Kingdom, Denmark, Lithuania, the Netherlands, Ukraine, France, Russia, Romania, and Serbia.

The festival took place at DCTV and the School of Visual Arts in Manhattan. Two pilot programs launched during the festival – the online theater and VR films. The program of films in a Virtual Reality format were presented by the following Russian companies: Russian VR Seasons, The State Hermitage Museum / ARTEKOM LTD, Videofabrika.ru; the program was organized by IKRAN Inc. (USA). The online theater platform was created by Edizz, Inc. (USA).

The festival has screened over 300 documentaries in the past 12 years.
Seven film directors from the US, Russia, and Bulgaria were presented at the festival and took part in Q&A sessions. The organizing committee would also like to thank Ms. Gražina Michnevičiūtė, the Cultural Attaché of the Consulate General of Lithuania in New York, for presenting the film «Romas, Thomas and Joseph» (Lithuania).

An art exhibition dedicated to the memory of Oscar Rabin (1928-2018) was opened during the festival. The display of graphics and pictures from the family’s collection were presented by Catharine Kropivnitskaya-Savitskaya and Natalya and Vladimir Efroimson. Catharine Kropivnitskaya, artist Vitaly Komar (co-founder of the Sots-Art movement and co-organizer of the Buldozer’exhibition), Tatiana Kolodzei (the Kolodzei Art Foundation), and others took part in a Q&A session. 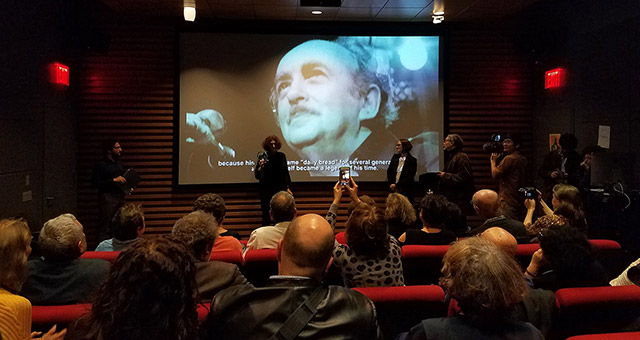 After the five Virtual Reality film screening sessions, the roundtable “It’s a Mad, Mad, Mad… Virtual Reality” took place. A diverse and multifaceted group of documentary filmmakers who have used VR in their projects took part in the discussion. A video summary of the discussion will be posted online.

After the Award Ceremony the poetry reading “Accents of New York” took place. The event was organized by New York-based literary journals The New Review and Interpoezia. The bilingual poets of the so-called Hudson Note as well as their English-language and Bulgarian colleagues presented their new verses in English and Russian. A video of the event will be uploaded online.

The festival program focused on social documentaries reflecting the main conflicts of modern society and Eastern Europe, on problems within democracy, freedom of speech and human rights, on civil rights of individuals with disabilities, on preserving the memory of the Holocaust in the 21st century, as well as questions of unconventionality of writers, and more. Several films were focused on modern culture and literature.

The festival awards were created by:

Designer House of Alex Soldier — “Faces of Russia” and Special Jury Prize
Jeff Bliumis, sculptor, artist, — Grand Prix.
The Grand Prix of the festival is based on a graphic image designed by famous artist Ernst Neizvestny (1925-2016), a gift to the festival as an official logo.

The Humanitarian Award – YOU BE THE JUDGE, directed by Semen Pinkhasov. The documentary was screened under the program “Remembering the Holocaust in the 21 Century”.
The Humanitarian Award is an award in recognition of the special contributions into preserving and developing humanitarian values made by a person, a film project, or a film.

Free Word — TO THE SUCCESS OF OUR HOPELESS CAUSE, directed by Evgeny Golinkin, Nikola Miletich, Russia-France;

Humanism in the Modern World – IAMVOLUNTEER. THE STORIES OF EMPATHIC PEOPLE, directed by Olga Arlauskas, Russia;

Diploma of the Pushkin Society in the US: